Virions are roughly spherical and exhibit icosahedral symmetry with a diameter of 26–30 nm. Virions have no envelope and no distinctive surface structures (Figure 1).

Virions contain one molecule of linear, positive sense, single stranded RNA. The genome has a size ranging from 8800–10,100 nt and contains a single large ORF encoding a polyprotein of 2858–3085 amino acids. A small genome-linked virus protein, VPg is linked covalently to the 5′ end of the genomic RNA. The untranslated regions (UTRs) flanking both ends of the ORF vary in size by species. The 5′-UTR of infectious flacherie virus (IFV) and sacbrood virus (SBV) (130–180 nt) is significantly shorter than that of the other iflaviruses (400–1200 nt).

All proteins arise by proteolytic cleavage of a single polyprotein. Mature virions contain three major structural proteins (VP1, VP2 and VP3) generally between 28 and 44 kDa. A fourth smaller capsid protein (VP4) of around 4–12 kDa has been reported in some species and is located in the second position of the capsid precursor coding region. Minor quantities of the uncleaved precursors have been reported in some species.

The genome is monopartite and contains a large ORF with genes encoding capsid proteins at the 5′ end and genes encoding the non-structural proteins at the 3′ end of the genome. The capsid proteins, arranged in the order of VP2-VP4-VP3-VP1, are preceded by a short leader protein (L) that is removed from VP2 before capsid assembly and has no known function. VP4 is analogous to VP4 present in some dicistroviruses and in the case of IFV is present as a minor structural component of the capsid. The non-structural proteins include a RNA helicase, a 3C-like cysteine protease, and a RNA-dependent RNA polymerase (5′ to 3′ orientation as illustrated in Figure 2). It is unclear if there are any conserved RNA secondary structures in the UTRs.

The viral RNA is infectious and serves as both genomic and viral mRNA. The replication of viruses occurs in the cytoplasm of infected cells but the mechanism of viral genomic RNA entry into the host cell cytoplasm is unknown. The genomic RNA is translated into a polyprotein which is autocatalytically cleaved into structural and non-structural component peptides. For three members in the family (Ectropis obliqua virus (EoV), Perina nuda virus (PnV) and Varroa destructor virus-1 (VDV-1)), there is evidence to suggest that translation of the polyprotein is mediated by an IRES. Mechanisms of polyprotein processing and the effects on host cell macromolecular synthesis during infection have not been well studied for the members of this family.

Honeybee viruses in the genus are serologically distinct. There are no known serological relationships between other members of the genus.

All member viruses have been isolated from arthropod species and appear to have restricted host ranges. IFV is known from the lepidopteran species Bombyx mori and Glyphodes pyloalis. PnV is known only from the lepidopteran Perina nuda. EoV infects the lepidopteran Ectropis obliqua. Deformed wing virus (DWV) and SBV are common viruses of the honey bee, Apis mellifera. VDV-1 was isolated from the honey bee parasitic mite, Varroa destructor. SBV and DWV are distributed globally likely from intensive international trade and transportation of bees and bee products. With the exception of PnV, which replicates in a cell line established from Perina nuda, there are no cell culture systems available for the propagation of other viruses in the group.

The species demarcation criteria are:

Phylogenetic analysis of the complete genomes and deduced amino acid sequence of capsid protein precursors indicate close genetic relationships between DWV and VDV-1 (nucleotide identities 79–89% and amino acid identities 89–98% in different regions of the genomes), reflecting a short evolutionary distance after the separation from a common ancestor. EoV and PnV also show a close genetic relatedness to each other. By contrast, the much larger genetic distances dividing these two pairs of species from each other, and from SBV and IFV, are more typical of the distances between different genera that are seen in some members of the order Picornavirales, e.g. the Picornaviridae and Secoviridae (Figure 3).

The viruses in this family have a structure and genome arrangement similar to the viruses in the Dicistroviridae, Picornaviridae, Marnaviridae and Secoviridae. The RNA genome contains a single large ORF encoding the capsid proteins at the 5′ end and the non-structural proteins at the 3′ end. The 5′ end of the genome is covalently linked to a small peptide, VPg, which plays an important role in RNA replication. The replicases of iflaviruses resemble those of the dicistroviruses, picornaviruses, marnaviruses and secoviruses by containing sequence motifs typical of RNA helicase (Hel), a chymotrypsin-like 3C protease (Pro), and an RNA-dependent RNA polymerase (RdRp) in the 5′ to 3′ orientation. The RdRp domains are phylogenetically related (Figure 3). The virions are icosahedral with pseudo-T=3 symmetry and a diameter about 30 nm.

Ifla: from the type species of the genus, Infectious flacherie virus. 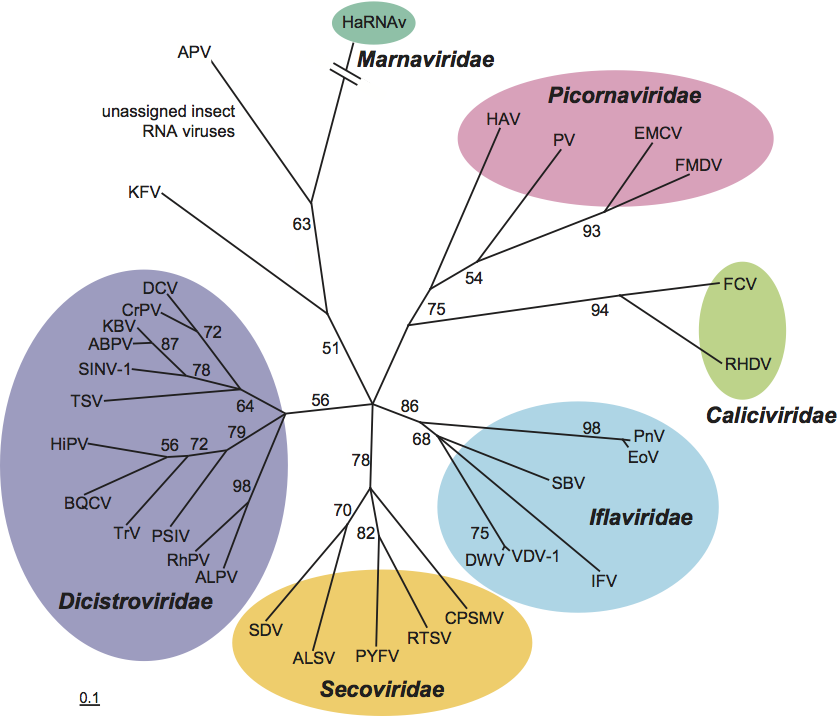