The virion is enveloped and contains a segmented dsRNA genome. The innermost protein capsid is a polymerase complex responsible for genome packaging, replication and transcription.

Virions contain three segments of linear, double stranded RNA: L (6.4–7.1 kb), M (3.6–4.7 kb), and S (2.6–3.2 kb). The complete genome is 12.7–15.0 kb and has a guanine+cytosine content of approximately 56%. All the genome segments are enclosed in a single particle and each virion contains a single copy of the genome. The genome constitutes approximately 10% of the virion weight.

The envelope contains three integral membrane proteins: P6, P9 and P10. Additional membrane proteins with unknown function are found from some members of the genus. Receptor binding spike is anchored to the envelope via fusogenic protein P6. The spike complex is composed of one (P3) to three polypeptides (P3a, P3b, P3c). Protein P8 forms the nucleocapsid surface shell (Figure 1) or is part of the envelope. Protein P5 is a lytic enzyme associated on the nucleocapsid surface. Major capsid protein P1 (120 copies per virion) is involved in single stranded RNA binding. Protein P2 is the viral replicase and transcriptase and is located in the interior of the P1 shell. The turret-like extrusions of the polymerase complex are made by hexamers of P4 protein. P4 is a nucleoside triphosphatase required for genome packaging and transcription. Minor capsid protein P7 is an assembly factor.

Virions are composed of 20% lipids by weight. There is enough lipid to cover about one-half of the envelope surface area (the rest being protein). Viral lipids are derived from host plasma membrane. The lipid compositions of viral envelope and host plasma membrane are similar.

The overall genetic organization is similar in all proposed members of the genus. Genes are clustered into functional groups (Figure 2). Distinct noncoding regions at the termini of the three genome segments contain signals for genome packaging and replication.

Virions adsorb to pili or in some viruses directly to the outer membrane of the host bacterium (Figure 3). Viral envelope fuses with the host outer membrane and the nucleocapsid associated lytic enzyme locally digests the peptidoglycan layer. Viral polymerase complex delivery into the host cytoplasm involves an endocytic-like process at the host plasma membrane. The viral genome is transcribed by virion-associated RNA-dependent RNA polymerase within the polymerase complex. Early in the infection approximately equal amounts of messenger RNA molecules are produced from L, M and S. Later in the infection cycle transcripts of M and S typically predominate. This temporal control relies either on host factors or viral nonstructural proteins. Transcription is semi-conservative and produces full-length copies of the genome segments.

In terms of genome replication strategy, cystoviruses resemble eukaryotic double stranded RNA viruses. The structure, organization and functions of the polymerase complex containing the genome are the major similarities among members of families Cystoviridae, Reoviridae, Totiviridae, Partitiviridae and Picobirnaviridae. The T=13 architecture of the surrounding capsid layer is also shared by cystoviruses and reoviruses.

Figure 2 Genome organization of Pseudomonas phage phi6. The gene and protein numbers are the same. Genes encoding constituents of the polymerase complex and nucleocapsid are in green and blue, respectively. Genes encoding envelope associated proteins are in purple, and non-structural proteins in orange. 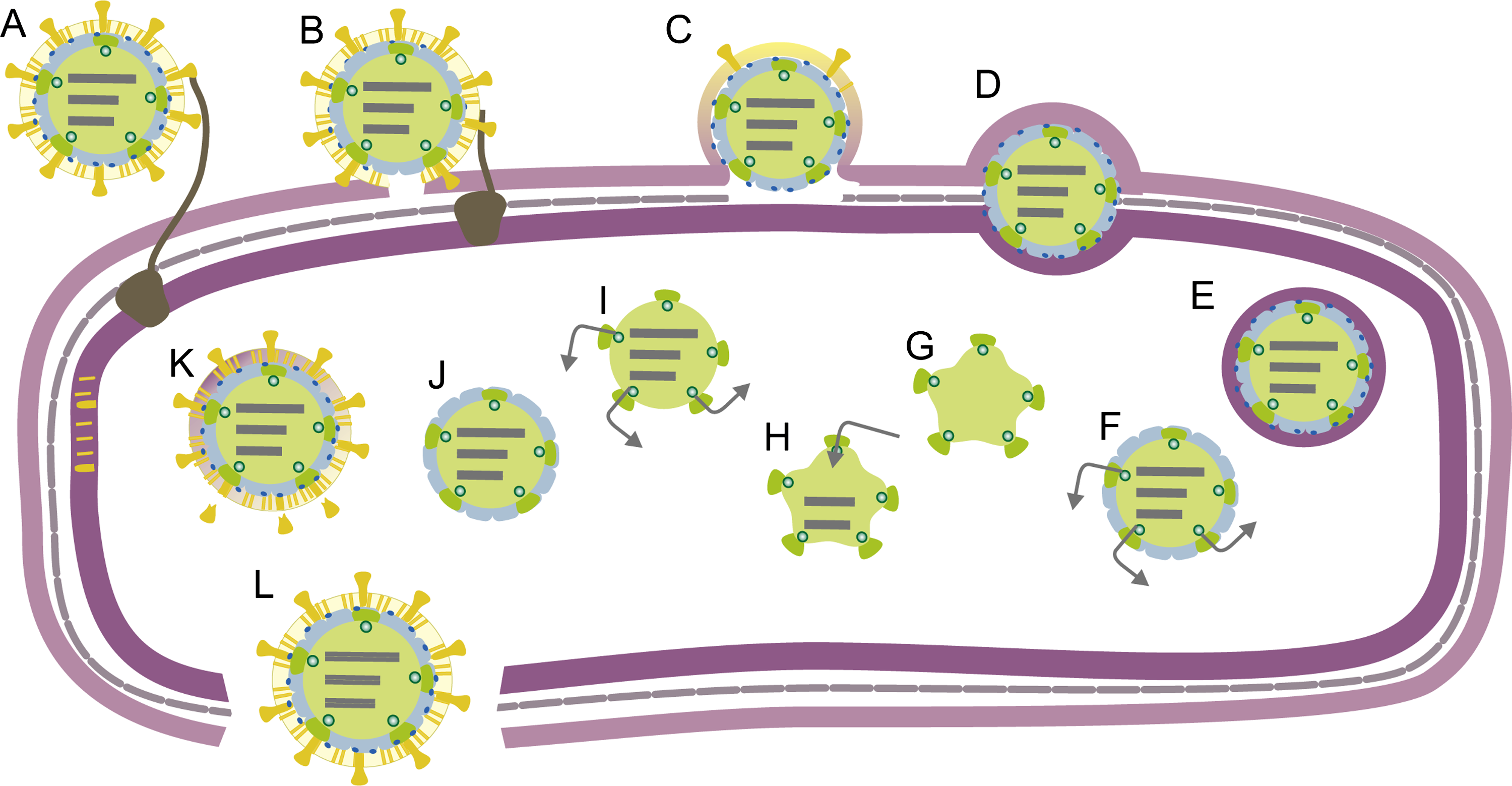