Virions are ovoid or ellipsoid to bacilliform in shape, have a regular symmetry, and measure 120–150 nm in diameter and 270–290 nm in length. Most notable is the thread- or flagellum-like extension (appendage) at one end of the virion. The virion consists of an inner, rod-shaped nucleocapsid with a tight-fitting capsid layer, an intermediate tegument layer and an outer lipid-containing trilaminar envelope. The isolated nucleocapsid typically measures 65–70 nm in diameter and 300–350 nm in length. It contains a DNA-protein core bounded by a distinctive capsid layer, giving it a cross-hatched or striated appearance (Figure 1).

The nucleocapsid contains a single molecule of circular dsDNA with an approximate size of 300 kbp. The G+C ratio of white spot syndrome virus (WSSV) is about 41%.

The virions contain at least six major and at least 35 medium or minor polypeptides ranging in size from 14 to 664 kDa. The three structural elements of the virion each contain two major proteins: VP28 and VP19 in the envelope, VP26 and VP24 in the tegument, and VP664 and VP15 in the nucleo­capsid. VP15 is a very basic, histone-like DNA-binding nucleoprotein. The three major proteins, VP28, VP26 and VP24, are phylogenetically related.

Lipids are present in the envelope. The composition of lipids is known for virions purified from the crayfish Procambarus clarkii. The lipids are of host origin and are derived from host-cell nuclei.

None of the major virion structural proteins is glycosylated.

The WSSV genome has, depending on the isolate, about 181 non-overlapping ORFs and almost equally distributed over both DNA strands (WSSV-CN; Figure 2). Only a few genes (20%) have been identified. These genes encode virion proteins (see below), proteins involved in DNA replication (DNA polymerase, ribonucleotide reductase subunits, dUTPase, thymidylate synthase, thymidine-thymidylate kinase) and protein-modifying proteins (protein kinase). The virion protein genes are not clustered, but are dispersed on both strands of the WSSV genome. The WSSV genome includes a very large gene (vp664) that encodes a major nucleocapsid protein of about 664 kDa. Most ORFs are unassigned. WSSV has also been shown to contain genes homologous to Marsupenaeusjaponicus and to Penaeus monodon. These may exemplify mimicry of the structure and function of host genes, e.g. to avoid detection and destruction by the host immune system, a stratagem used by other dsDNA viruses. Alternatively they may be degenerated proviral remnants.

The WSSV genome is further characterized by the presence of nine homologous repeat regions (Hr1-9; Figure 2). The number of imperfect palindromic repeats (250 bp in size) within an hr varies per isolate.

Viral transcripts are often but not always polyadenylated and they are usually capped. There is no evidence to suggest the occurrence of RNA splicing. Three immediate early genes have been identified in WSSV, and WSSV early genes and one of the immediately early genes has a promoter motif (-[a,c][a,c]TCAxT-) that matches the RNA polII core promoter of the Arthropods. The WSSV late genes’ consensus promoter (-A[a,t][a,t,g]AC-) is usually less than 100 nt (nucleotides) from the transcriptional start site. Consensus TATA box sequences have been found at about 25 bp upstream of early gene transcription initiation sites. Late transcripts seem to start 25 nt downstream of an A/T-rich region. Structural protein genes widely use polycistronic mRNAs and internal ribosome entry site elements to regulate their tranlsation.

Replication of WSSV occurs in the nucleus, where the virions are also assembled (Figure 1).

Polyclonal and monoclonal antibodies have been raised against WSSV virions, and they can be used as diagnostic tools. In recent years, researchers have found that the virus infection can be neutralized with antisera against the envelope proteins VP28, VP31, VP33 (VP36B) and VP12B (VP68). From this, it can be inferred that these proteins are involved in WSSV infection.

WSSV can infect a wide range of aquatic crustaceans including salt, brackish and fresh water penaeids, crabs and crayfish.

The virus is transmitted by mouth by cannibalism of diseased individuals or via water through the gills. The virus can also be transmitted vertically from adults to offspring, either by being released from non-viable WSSV-infected eggs or from the supporting cells in ovarian tissue.

WSSV has been identified from crustaceans in China, Japan, Korea, Southeast Asia, South Asia, the Middle East and the Americas. An unusual property of the virus is the extremely wide host range despite a very low level of genetic polymorphism. The latter suggests that white spot disease (WSD) is a relatively recent epizootic.

The major targets of WSSV infection are tissues of ectodermal and mesodermal embryonic origin such as subcuticular epithelial cells (including those of the shrimp stomach), gills, lymphoid organ and connective tissue. Although WSSV infects the underlying connective tissue in the shrimp hepatopancreas and midgut, the columnar epithelial cells of these two organs are of endodermal origin, and they do not become infected. WSSV can grow in primary cultures of lymphoid organ and ovary. Infection sometimes causes disease and sometimes not, depending upon factors as yet poorly understood but related to species tolerance and environmental triggers. Shrimp and other crustaceans susceptible to disease from this virus show gross signs of lethargy, such as lack of appetite and slow movement, and often a reddish coloration of the whole body together with “white spots” embedded within the exoskeleton. These spots are the result of calcified deposits that range in size from a few millimeters to 1 or more centimeters in diameter. However, in some cases such as acute experimental infections resulting from injected viral preparations, there may be no gross signs of infection other than lethargy and lack of appetite. Most affected animals die within 3–10 days after infection. With an appropriate infection dose to allow sufficient time before mortality, animals susceptible to disease show large numbers of virions circulating in the hemolymph, but this may also occur for tolerant species that show no mortality. Thus, high viral loads per se do not cause disease or mortality for all susceptible species.

Only a single species within the genus has been identified to date (White spot syndrome virus). Various isolates with small genetic polymorphisms have been identified (variants). It should be realized, however, that as the Nimaviridae is a newly recognized family, the species concept is subject to change after existing and new isolates have been studied in more detail.

Morphologically, the WSSV virions and rod-shaped nucleocapsids resemble the budded virus particles of the baculoviruses, polydnaviruses and the unassigned Oryctes rhinoceros virus. The presence of repeat regions dispersed over the DNA genome is a property shared with members of the families Baculoviridae and Ascoviridae, the proposed Hytrosaviridae family and the unassigned nudiviruses. WSSV is phylogenetically distinct from other large DNA viruses (Figure 3).

Nima: Latin for “thread”; referring to the thread- or tail-like polar extension (appendage) on the virus particle. 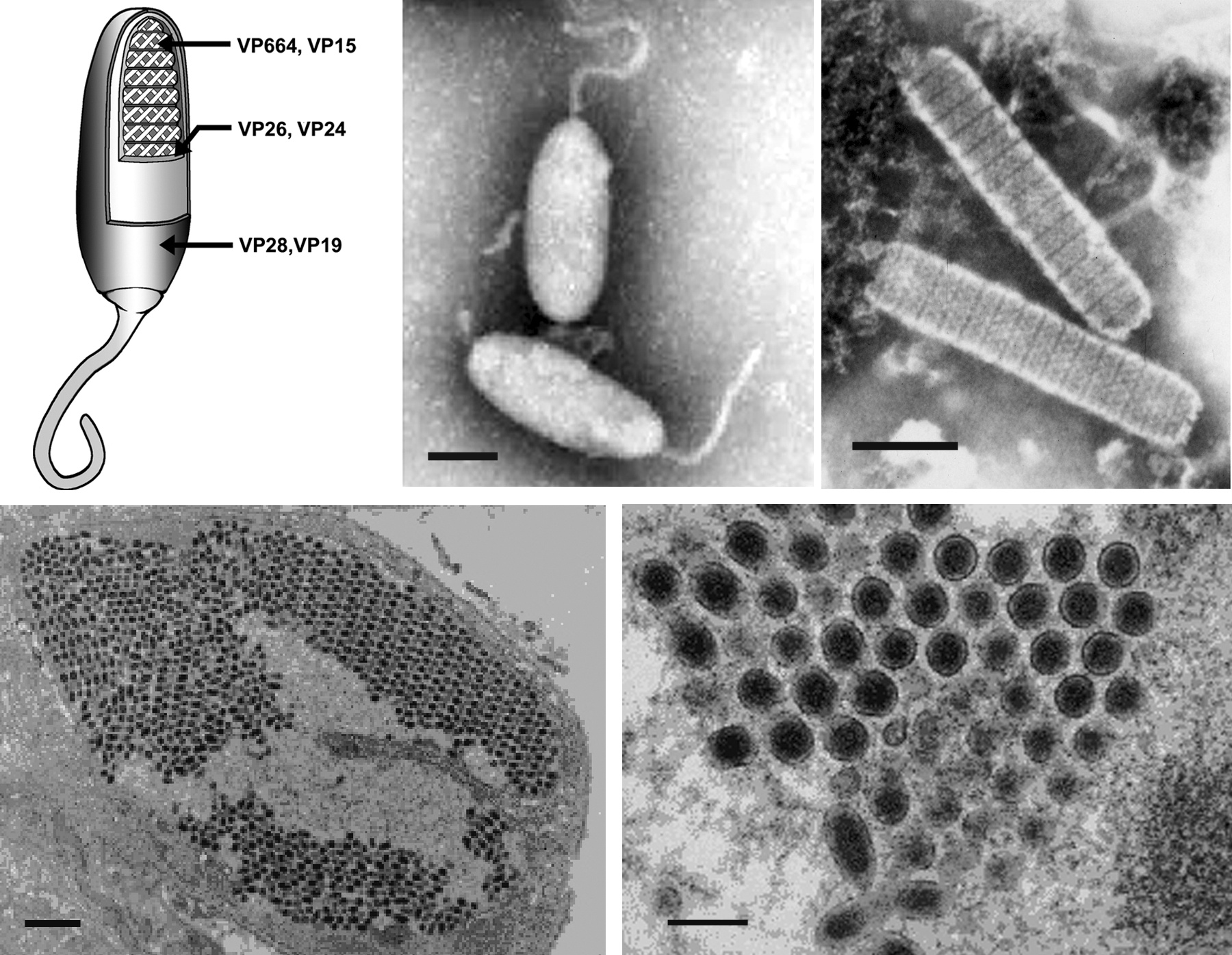 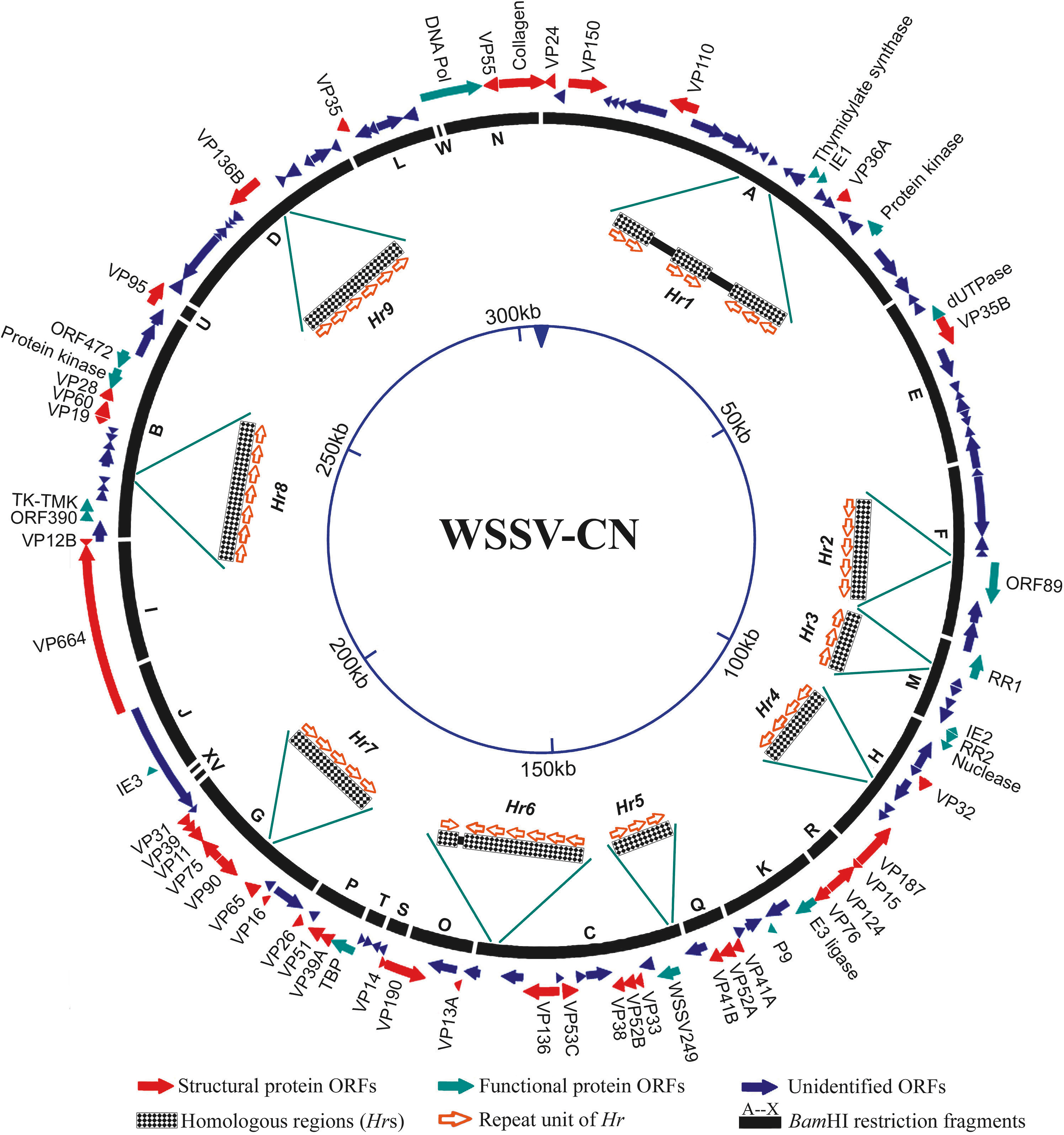 Figure 3 Cladogram based on genetic distances between aa sequences derived from the DNA polymerase gene of WSSV and a number of other large DNA viruses, as well as two mammalian representatives. 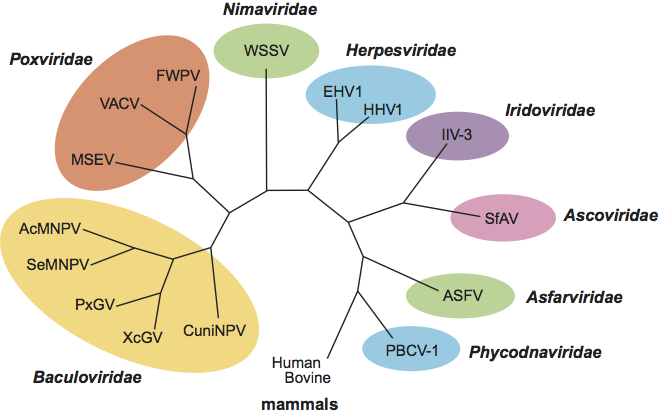