PM2 is a virulent virus infecting gram-negative Pseudoalteromonas species. The characteristic feature of the corticovirus is the highly supercoiled circular double stranded DNA genome. The virions are composed of an icosahedral protein capsid and an inner protein-rich membrane enclosing the genome.

Icosahedral virions consist of an internal membrane and an outer protein capsid that has a diameter of 57 nm between facets (Figure 1). The capsid consists of 200 major capsid protein P2 trimers that are organized on a pseudo T=21 lattice. Protein P2 is composed of two beta-barrels disposed normal to the capsid surface. The P2 trimers have pseudo-six-fold symmetry and the structure is stabilized by calcium ions. Spikes protrude about 8 nm from the capsid surface at the five-fold vertices. The spikes are homopentamers and formed of protein P1. P1 is composed of three beta-barrel domains arranged end to end. The distal C-terminal domains of P1 are used for receptor recognition. The N-termini of P1 form pentagonal assemblies at the vertices. The inner membrane (47 nm in diameter) contains host plasma membrane-derived phospholipids and virus-encoded proteins P3 to P10. Transmembrane proteins P3 and P6 are organized into a lattice on the membrane vesicle surface, on which the outer protein capsid is assembled.

The mass of the virion is about 45×106. The buoyant density in CsCl is 1.28 g cm−3 and in sucrose 1.26 g cm−3, and the S20,w is 293S. Virions are stable at pH 6–8, and are very sensitive to ether, chloroform and detergents. The virion stability is strongly dependent on sodium and calcium ions. Virions are unstable when frozen.

a P is for protein; Arabic numeral corresponds to the Roman numeral of the gene.

b N is for non-structural protein.

To infect and replicate, PM2 delivers its genome across the cell envelope of two known marine host strains: gram-negative Pseudoalteromonas species ER72M2 and BAL-31. Virions adsorb via the distal tips of the spike proteins to uncharacterized receptors. The internal membrane mediates the translocation of the supercoiled genome across the host cell envelopes via fusion. Replication of the PM2 genome, most probably by a rolling circle mechanism, takes place in proximity to the host cytoplasmic membrane. The genome is organized in three operons (Figure 2). Operons OEL and OER encode early function gene products: the replication initiation protein P12 and transcription regulatory proteins P13, P14, P15 and P16. Expression of the genes for structural proteins is under the control of the late promoter (OL), which is activated by the phage-encoded transcription factors P13 and P14. The release of mature virions from the cell occurs by a novel lysis mechanism.

Phages are virulent and replicate in two known strains of marine host bacteria of the genus Pseudoalteromonas. Although PM2 is virulent and the sole member of the family Corticoviridae, using a comparative genomic approach, integrated corticoviral genetic elements have been identified to commonly reside within aquatic bacterial chromosomes. 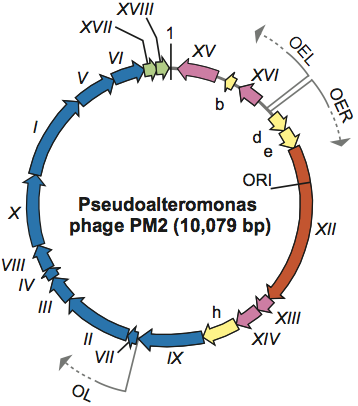