Virion particles of avian hepatitis E virus (Figure 3) revealed by negative staining EM of bile samples from chickens with hepatitis–splenomegaly syndrome are similar in size and morphology to members of the genus Hepevirus.

Virion buoyant density is 1.35 to 1.40 g cm−3 in CsCl and 1.29 g cm−3 in glycerol and potassium tartrate gradients. Virion S20,w is 183S. Virion is sensitive to low-temperature storage (between −70 °C and +8 °C) and iodinated disinfectants. The virion of hepatitis E virus is more heat-labile than is hepatitis A virus: hepatitis E virus was about 50% inactivated at 56 °C and almost totally inactivated (96%) at 60 °C for 1 h. Liver suspensions containing avian hepatitis E virus remained infectious after treatment with chloroform and ether but lost infectivity after incubating at 56 °C for 1 h or 37 °C for 6 h. Viral infectivity in liver suspensions was reduced 1000-fold after treatment with 0.05% Tween-20, 0.1% NP40 and 0.05% formalin.

The HEV genome is a linear, positive sense, ssRNA molecule of approximately 7.2 kb, with a 5′-m7G cap structure and a 3′-poly(A) tail. The genome of avian hepatitis E virus is similar but only about 6.6 kb in size.

Virions are constructed from a major capsid protein encoded by the second open reading frame (ORF2), and the CP may be proteolytically processed. A small immunoreactive protein (12.5 kDa) encoded by the third ORF (ORF3) has been identified and shown to exhibit multiple functions associated with virion morphogenesis and viral pathogenesis. Non-structural proteins encoded by the first major ORF (ORF1) have limited similarity with the “alpha-like supergroup” of viruses and contain domains consistent with a Mtr, RNA helicase, papain-like cysteine protease, and RdRp. The translational and posttranslational processes of the non-structural polyprotein remain unresolved. It remains unclear whether the non-structural polyprotein functions as a single protein with multiple functional domains or as individually-cleaved smaller proteins. RdRp, Mtr/guanylyltransferase and NTPase/RNA helicase activities have been experimentally demonstrated for ORF1 recombinant proteins.

Evidence for glycosylation of the major CP has been reported following its expression in mammalian cells. The CP sequence contains three potential sites for N-linked glycosylation and a signal peptide sequence at its N terminus. Mutations within the CP glycosylation sites prevent the formation of infectious virus particles, although the lethal effect is due to altered protein structure rather than elimination of glycosylation.

The RNA genome of HEV is organized into three ORFs, with the non-structural proteins encoded toward the 5′ end of the genome and the structural protein(s) toward the 3′ end. Capped genomic RNA is infectious for chickens, pigs, rhesus monkeys and chimpanzees. The 5′-NCR is only about 26 nt long, and a cap structure has been identified in the 5′ end of the viral genome and may play a role in the initiation of hepatitis E virus replication. The 3′-NTR contains a cis-reactive element. ORF1 encodes the non-structural polyprotein. ORF2 encodes the major CP, and binds to cell surface heparan sulfate proteoglycans (HSPGs) in liver cells. The ORF3 encodes a small phosphoprotein (113–114 aa) with a multifunctional C-terminal region. ORF2 overlaps ORF3, but neither overlaps with ORF1 (Figure 4). A bicistronic subgenomic mRNA encoding both ORF2 and ORF3 proteins has been identified.

Although avian hepatitis E virus shares only about 50% nucleotide sequence identity with HEV isolates, the genomic organization and functional motifs are relatively conserved between them (Figure 4).

A single serotype of HEV has been described, with extensive cross-reactivity among circulating human and swine strains. Antibodies cross-reactive with capsid protein epitopes of human strains have been reported in various animal species but the viruses responsible for the cross-seropositivity were genetically identified only in pig, chicken, deer, mongoose, rat and rabbit. Avian hepatitis E virus also cross-reacts serologically with strains of HEV, and common antigenic epitopes have been identified in the capsid protein.

HEV is associated in humans with outbreaks and sporadic cases of enterically transmitted acute hepatitis. The virus is considered endemic in tropical and subtropical countries of Asia and Africa, as well as in Mexico, but antibody prevalence studies suggest a global distribution of this virus. HEV is a recognized zoonotic virus, and pigs and more likely other animal species are reservoirs.

Transmission is via the fecal–oral route. Sporadic cases of human hepatitis E have been reported in both industrialized and developing countries, although epidemics occur only in developing countries. The sources of infection appear to be different for epidemics and sporadic cases: contaminated drinking water is the main source for epidemics, whereas the risk factors for sporadic cases include shellfish, contaminated animal meats and direct contacts with infected animals. Human-to-human transmission seems rare in hepatitis E epidemics. Genotypes 1 and 2 strains are restricted to humans, whereas genotypes 3 and 4 strains have a broader host range and are zoonotic. Interspecies transmission of genotypes 3 and 4 hepatitis E virus between swine and non-human primates has been experimentally demonstrated. Pig handlers in both developing and industrialized countries are shown to be at increased risk of hepatitis E virus infection. Sporadic cases of acute hepatitis E have been epidemiologically and genetically linked to the consumption of contaminated raw and undercooked animal meats.

Viruses within the genus Hepevirus infect mammals, and thus far strains within this genus have been genetically identified from human, pig, mongoose, deer, rat and rabbit.

A novel strain of hepevirus was detected from fecal samples of wild Norway rats (Rattus norvegicus) in Germany. Based on the available partial sequence, the rat hepevirus shares approximately 50–60% nucleotide sequence identity to human and avian strains, respectively. The rat hepevirus thus appears to be a new genotype in the genus Hepevirus.

HEV is similar to members of the family Caliciviridae based on the superficial structural morphology as revealed by electron microscopy, and its genome organization. However, HEV does not share significant sequence homology with members of the family Caliciviridae. The Cap structure at the 5′ end of the HEV genome is absent from caliciviruses. HEV shows highest, but limited, amino acid sequence similarity in its replicative enzymes with Rubella virus and alphaviruses of the family Togaviridae and with plant furoviruses (Figure 6). The capping enzyme of HEV has properties very similar to those of viruses within the “alphavirus-like supergroup”. 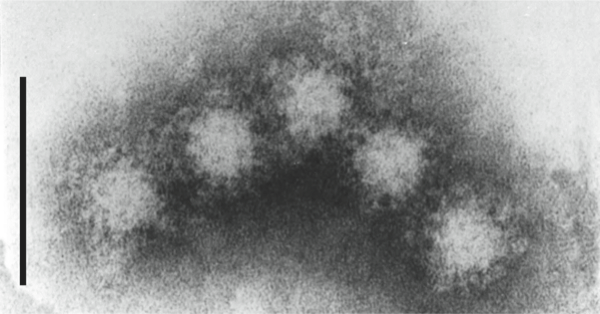 Figure 2 Structure of the hepatitis E virus-like particle (VLP) (T=1). (A) Crystal structure of hepatitis E virus VLP. The three domains, S, P1 and P2 are colored blue, yellow and red, respectively. The VLP is positioned in a standard orientation with the 3 2-fold icosahedral symmetry axes aligned along the vertical, horizontal, and viewing directions, respectively. (B) Cryo-EM reconstruction at 14 resolution. The surface is colored by radial depth cue from blue, yellow, to red. (C) Hepatitis E virus VLP with only the S domain. (D) VLP with S and P1 domains. (E) VLP with P1 and P2 domains. 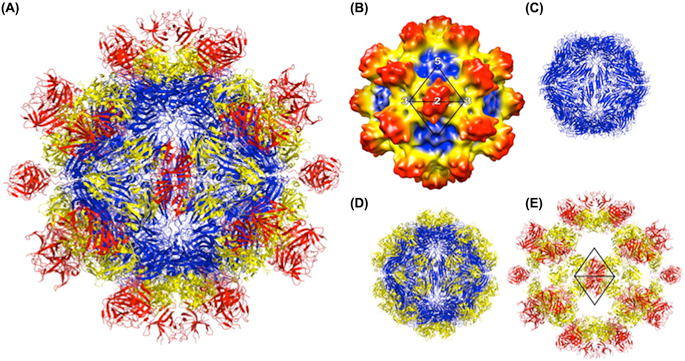 Figure 3 Electron micrograph of 3035 nm diameter particles of Avian hepatitis E virus. The virus particles were detected from a bile sample of a chicken with hepatitissplenomegaly syndrome. Bar=100 nm. 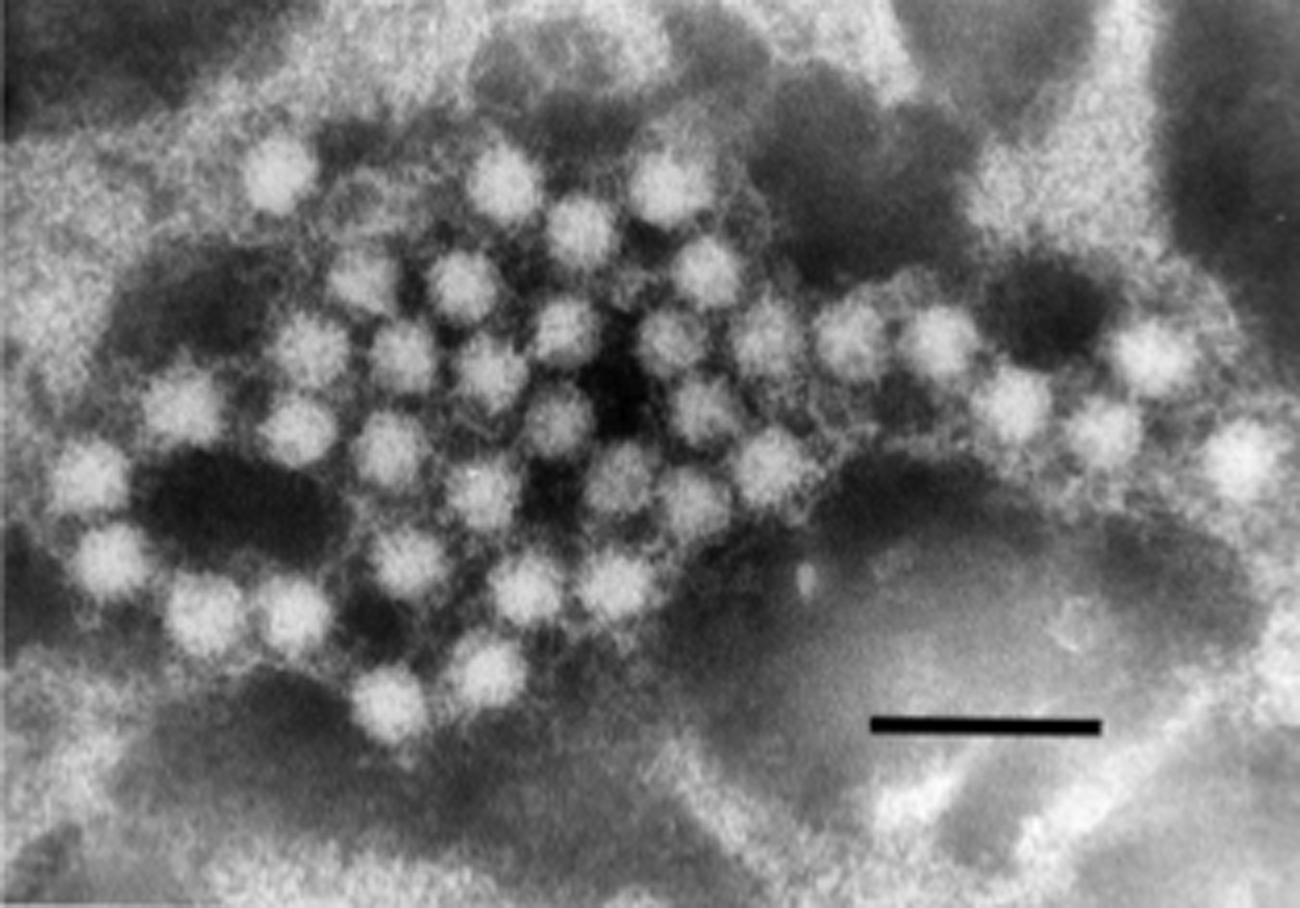 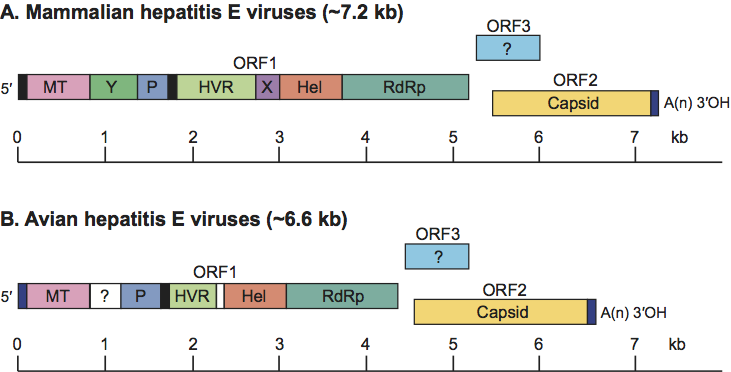 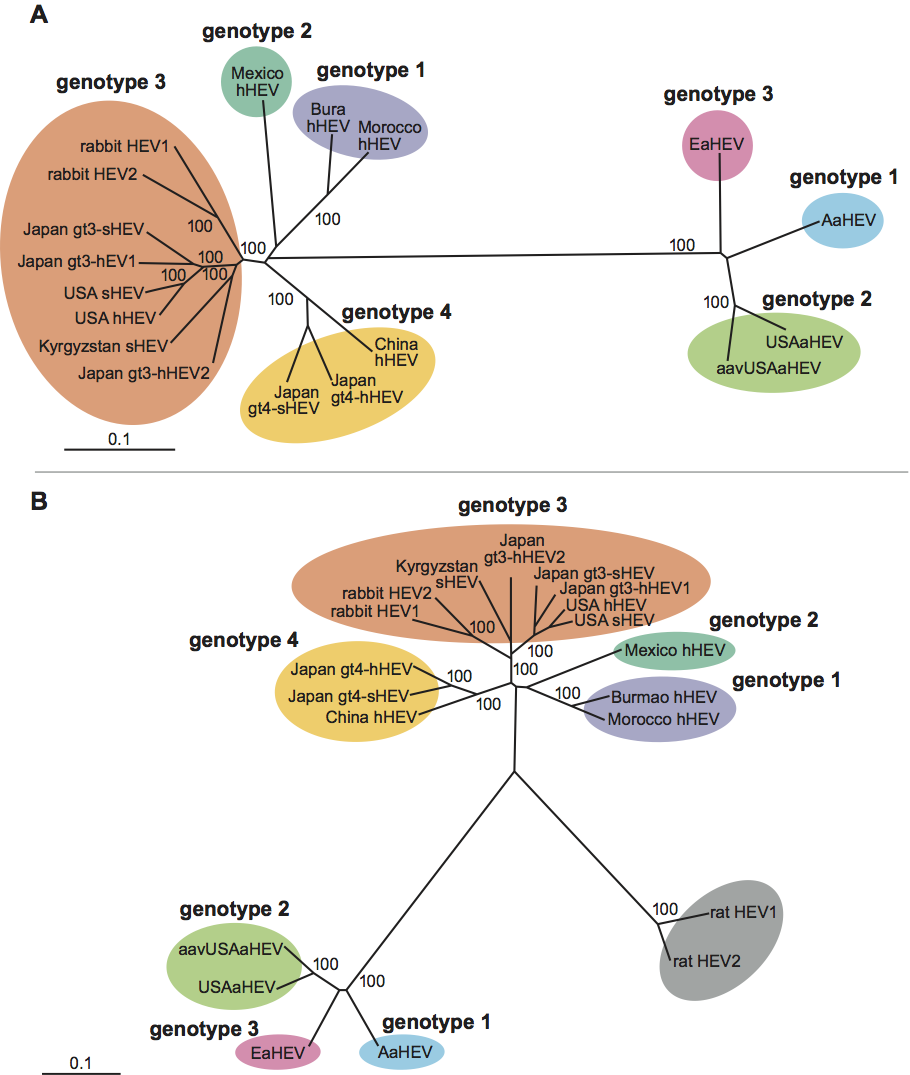 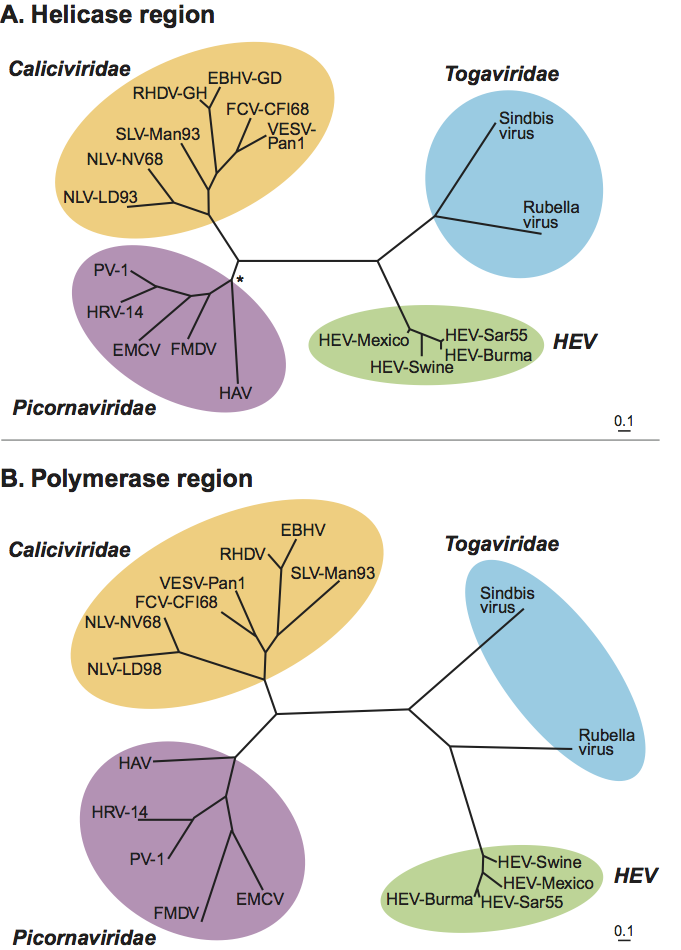