Plant viruses with two components of negative sense ssRNA and non-enveloped flexuous rod-shaped virions. They are only distantly related to other ssRNA viruses such as the Rhabdoviridae.

Virions are fragile non-enveloped rods mostly measuring 320–360×about 18 nm; each has a central canal about 3 nm in diameter and an obvious helix with a pitch of about 5 nm (Figure 1). As virions are very unstable in vitro, their detection and visualization may be facilitated by prior fixation with glutaraldehyde. The helix of particles, especially those in purified preparations, tends to loosen and particles are then seen as partially uncoiled filaments.

The genome of lettuce big-vein associated virus (LBVaV) consists of ssRNA, but after deproteinization of purified virions, both ds- and ssRNA are detected. The genome is 12.9 kb in size, divided into two components of 6.8 kb (RNA-1) and 6.1 kb (RNA-2); their 3′-termini have no poly(A) tracts. The 3′- and 5′-terminal sequences of the two RNAs are similar, but do not exhibit inverse complementarities. Conserved motifs in the transcription start and end signals resemble those of viruses in the order Mononegavirales.

The size of the coat protein, when estimated by PAGE, is about 48 kDa. The CP cistron, located on RNA-2, encodes a protein of 397 aa with a predicted size of 44.5 kDa.

The first genomic segment (RNA-1) contains one small putative ORF possibly coding for a 5 kDa protein and one large ORF that encodes a protein of 232 kDa (designated L protein by analogy with the L polymerase of rhabdoviruses) (Figure 2). The second genomic segment (RNA-2) contains five ORFs. The first ORF encodes the coat protein (44.5 kDa) and the second to the fifth ORFs code for proteins with unknown functions (36, 32, 19 and 41 kDa respectively) (Figure 2). Although the genome organization of LBVaV is similar to that of rhabdoviruses, LBVaV does not have a non-­coding leader sequence. The aa sequence of the L protein is homologous with the L polymerases of some negative sense RNA viruses, especially those of rhabdoviruses.

The CP is a rather poor antigen. LBVaV and tobacco stunt virus (TStV) are serologically closely related.

Both LBVaV and TStV are transmitted in soil and in hydroponic systems by zoospores of the chytrid fungus Olpidium brassicae. The non-crucifer strain of O. brassicae transmitting Mirafiori lettuce big-vein virus (MLBVV; genus Ophiovirus) and TStV in Japan has recently been referred to as Olpidium virulentus and the new name was also used for other O. brassicae isolates infecting lettuce and shown to be associated with the presence of LBVaV and MLBVV in Australia. A further proposal based on genetic and host range differences of Olpidium spp. from many countries suggested that lettuce-infecting isolates could be named Olpidium compositae.

Due to the longevity of infectious LBVaV from stored O. brassicae resting spores, it is assumed that the virus is carried internally by the fungus.

The viruses are also transmitted experimentally, sometimes with difficulty, by mechanical inoculation. Neither of the viruses is reported to be seed-transmitted.

TStV was considered to be distinct from LBVaV. However, based on nucleotide and amino acid sequence identities between the two, the former was later considered to be a tobacco-infecting strain of the latter. 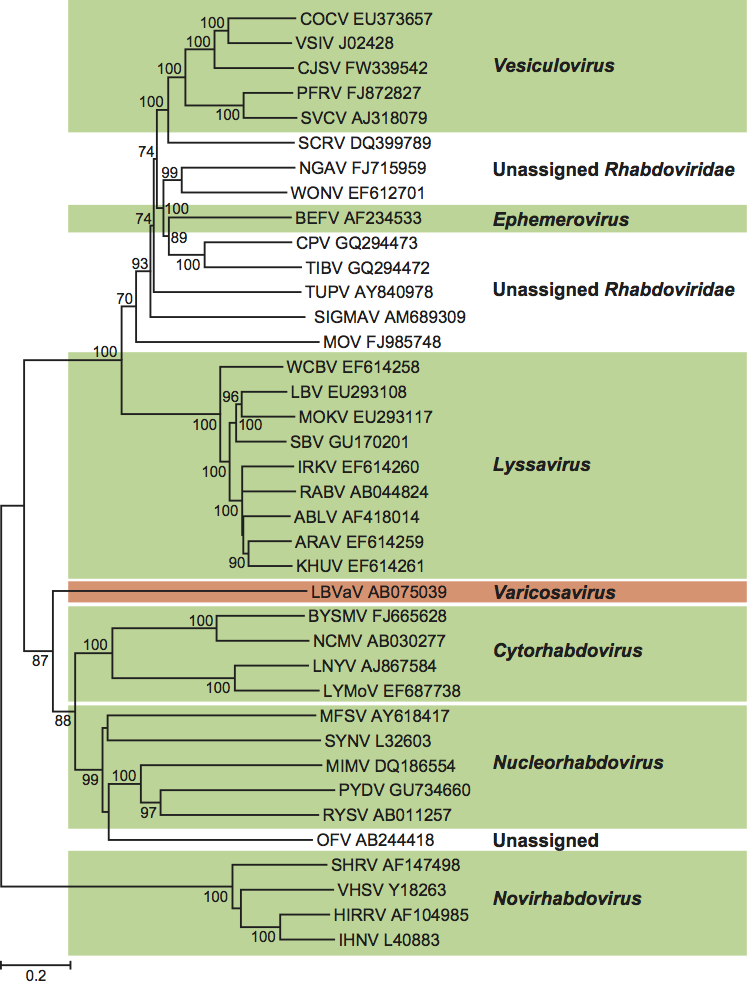