The ribonucleoproteins (RNPs) have a thin filamentous shape; they consist of nucleocapsids, 3–10 nm in diameter, with lengths proportional to the sizes of the RNAs they contain. The filamentous particles may appear to be spiral-shaped, branched or circular (Figure 1). No envelope has been observed.

RNP preparations can be separated into four or five components by sucrose density gradient centrifugation, but form one component with a buoyant density 1.282–1.288 g cm−3 when centrifuged to equilibrium in CsCl solutions.

The nucleocapsid proteins are of 34–35 kDa. Small amounts of a minor 230 kDa protein co-purify with RNPs of RSV, rice hoja blanca virus (RHBV) and RGSV. This protein may be an RdRp polymerase, as this activity is associated with filamentous nucleoprotein particles.

The 3′- and 5′-terminal sequences of each ssRNA are almost complementary for about 20 bases. Several RNA segments encode two proteins in an ambisense arrangement (Figure 2). In most tenuiviruses, the nucleocapsid protein (pC3; N) is encoded by the 5′-proximal region of the virion-­complementary sense strand of RNA-3. Virion-sense RNA-4 encodes in its 5′-proximal region a major non-structural protein (p4; NCP) that accumulates in infected plants. Some of the intergenic non-coding regions (NCRs) between the ORFs can adopt hairpin structures. Some segments (e.g. RNA-1 of RSV and RNA-5 of MSpV) are of negative polarity. RNA-1 encodes the RdRp (pC1; RdRp). Some proteins are translated from sgRNAs (Figure 3). For MSpV, RHBV and RSV mRNAs, the production of mRNAs involves a cap-snatching mechanism. An RNA polymerase has been found associated with purified preparations of RSV, RHBV and RGSV. The RNA polymerase activity of RHBV is capable of replicating and transcribing the RNA segments in vitro. In RHBV and RSV, p3 is a suppressor of RNA silencing. In RSV, pC4 is a movement protein.

Plant hosts of tenuiviruses are all in the family Gramineae.

Tenuiviruses can be transmitted transovarially by viruliferous female planthoppers to their offspring, and through sperm from viruliferous males. Mechanical transmission using sap extracts is difficult.

Characteristic inclusion bodies, consisting almost entirely of NCP are formed in cells of infected plants. The protein p5 of RGSV accumulates in large amounts in both infected plants and vector insects.

An example of species discrimination is that between RSV and MSpV. RSV is transmitted by L. striatellus and infects 37 species in the Gramineae including wheat and rice. MSpV is transmitted by P. maidis and infects maize, occasionally sorghum and a few other graminaceous plants but not wheat or rice. RSV isolates have genomes of four RNA segments of 9090, 3514, 2475 to 2504 and 2137 to 2157 nt; the MSpV genome has five segments (ca. 9000, 3575, 2357, 2227 and 1317 nt). Also, the differences in sequence among the components of these viruses all fall outside the limits set by the Species Demarcation Criteria.

It is difficult to decide if RHBV, EHBV and UHBV are the same or different species. They have different vectors, different hosts, different sizes and numbers of RNA segments and the nt identity of their intergenic regions is less than 60%. However, the aa sequences of the four proteins on RNA-3 and RNA-4 are about 90% identical between RHBV, EHBV and UHBV (although the nt identities of these same coding regions are about 81% identical among them). So four out of five criteria are met, and therefore they could be considered distinct species, possibly only recently separated and now diverging, with little contact in the field between them.

Species names are in italic script; names of isolates, are in roman script. Sequence accession numbers [ ] and assigned abbreviations ( ) are also listed.

* Sequences do not comprise the complete genome segment.

* Sequences do not comprise the complete genome segment.

Phylogenetic relationships within the genus are illustrated in Figure 4.

Tenuiviruses have several similarities with viruses classified in the family Bunyaviridae, particularly those in the genus Phlebovirus. The multipartite genomes of tenuiviruses contain negative sense and ambisense components. RNPs containing the genomic RNAs can be purified from infected plants. The genomic RNA 5′ and 3′ ends can base-pair, and probably give rise to circular RNPs. Generation of mRNA involves a cap-snatching mechanism. Like viruses in most genera in the family Bunyaviridae, tenuiviruses infect their insect vectors as well as their primary hosts, plants. The number of genome components (four to six) and the apparent lack of a membrane-bound virus particle distinguish tenuiviruses from viruses in the family Bunyaviridae. Recent data raise the possibility that RGSV be classified in a separate genus. It has six RNA segments that in total encode four or five proteins in addition to those characteristic of the expression of a tenuivirus genome. Moreover, the sequence relatedness of the RGSV gene products with those of other tenuiviruses are all unusually low. Viruses of the recently established genus Emaravirus also have properties similar to tenuiviruses and members of the Bunyaviridae. 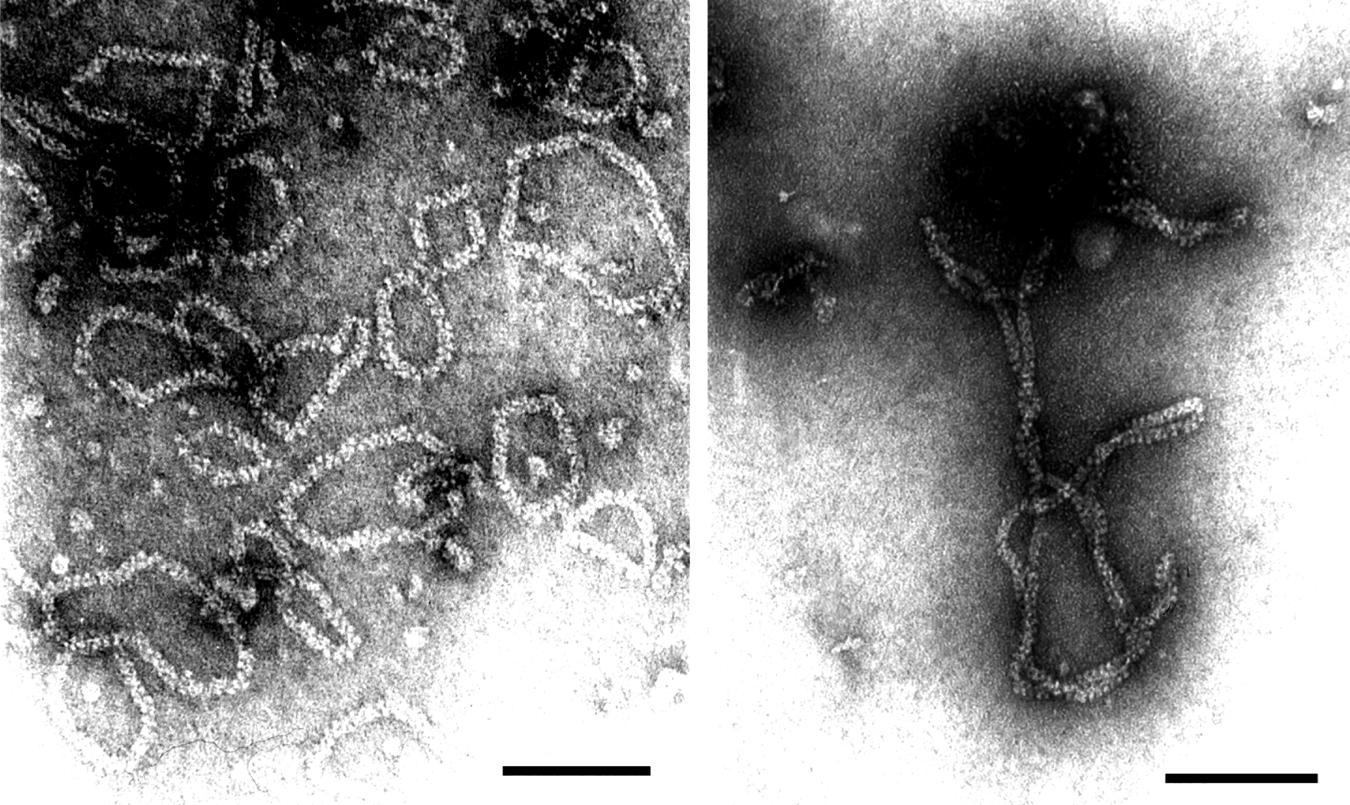 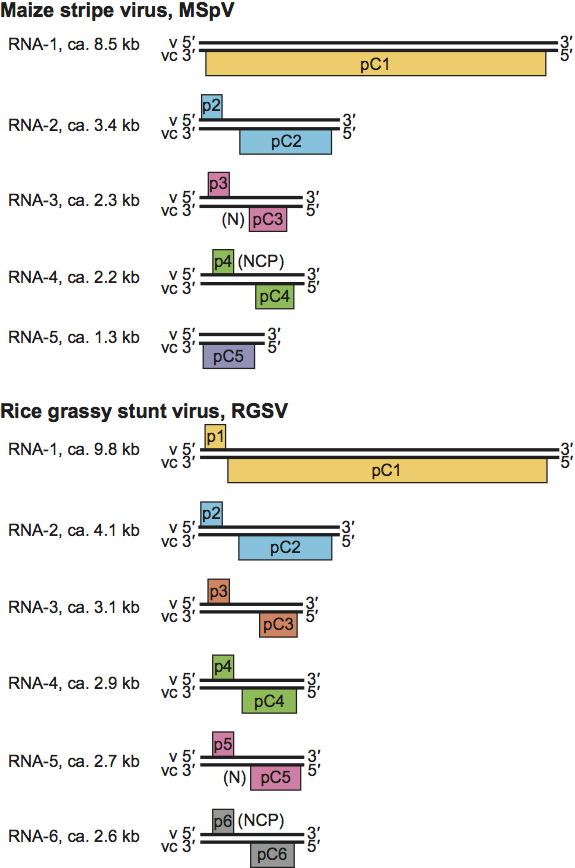 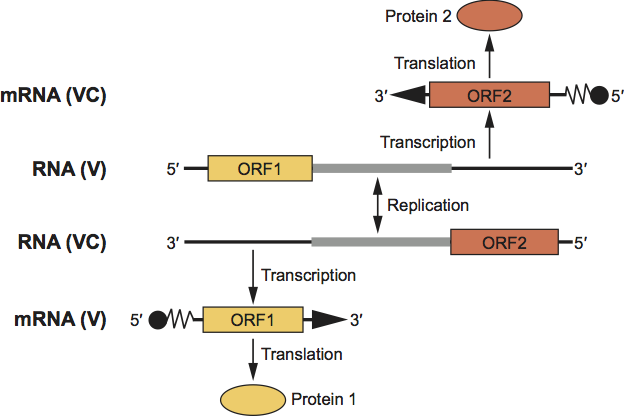 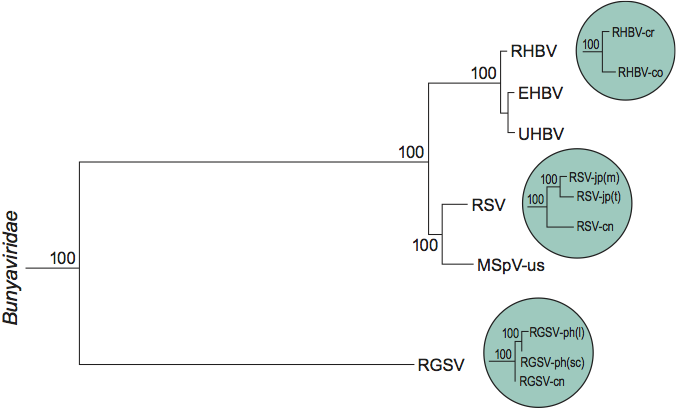