The virions are naked filamentous nucleocapsids about 3 nm in diameter (Figure 1), forming kinked (probably internally coiled) circles of at least two different contour lengths, the shortest length about 760 nm. The circles can collapse to form pseudo-linear duplex structures about 9–10 nm in diameter.

The Mr and sedimentation coefficients of virions are not known. The particles are unstable in CsCl but the buoyant density in cesium sulfate (for both Ranunculus white mottle virus [RWMV], and Mirafiori lettuce big-vein virus [MiLBVV]) is 1.22 g cm−3. The particles have limited stability between pH 6 and 8. Infectivity does not survive in crude sap held at 50 °C for 10 min (40–45 °C for tulip mild mottle mosaic virus, TMMMV). Particle structure survives limited treatment with organic solvents and nonionic or zwitterionic detergents.

The ssRNA genome is 11.3–12.5 kb in size and consists of three or four segments. Viral RNA of both polarities is present in purified virion preparations. As virions appear circularized, the presence of panhandle structures is suggested; however, significant complementation between the 5′- and the 3′-terminal sequences of genomic RNAs has not been demonstrated for either citrus psorosis virus (CPsV) or MiLBVV. At the 5′ and 3′ ends of MiLBVV genomic RNAs there are orthomyxovirus-like palindromic sequences that could fold into a symmetrically hooked conformation. These structures could not be predicted for CPsV. The size of RNA-1 is 8.2 kb for CPsV, about 7.5 kb for RWMV, 7.8 kb for MiLBVV and 7.6 kb for lettuce ring necrosis virus (LRNV). RNA-2 is about 1.8 kb for RWMV, MiLBVV and LNRV, 1.6 kb for CPsV and 1.7 for Freesia sneak virus (FreSV). RNA-3 is about 1.5 kb. For MiLBVV and LRNV a fourth genomic RNA of about 1.4 kb has been reported.

All ophiovirus genome segments appear to be of negative polarity (Figure 2). RNA-1 contains a large ORF coding for a protein that contains the core polymerase module with the five conserved motifs proposed to be part of the RNA-dependent RNA polymerase (RdRp) active site. A paramyxovirus-RdRp domain (pfam 00946) is also present and the SDD sequence, a signature for segmented negative-stranded RNA viruses (Orthomyxoviridae, Arenaviridae and Bunyaviridae), occurs in motif C. A further small ORF has also been reported. RNA-2 contains a single ORF on the complementary strand for CPsV, LRNV and FreSV; for MiLBVV two ORFs are reported: the small second ORF present in the virion sense strand has not yet been confirmed as functional. RNA-3 codes for the CP. RWMV CP antigen accumulates in the cytoplasm of parenchyma cells. RNA-4 (ca. 1.4 kb) has been identified only from MiLBVV and LRNV. While RNA-4 of LRNV potentially encodes only one protein (ca. 38 kDa) of unknown function, that of MiLBVV contains two ORFs (37 and 10.6 kDa) overlapping by 38 nt. The second ORF lacks an initiation codon and is proposed to be expressed by a +1 translational frameshift. Nuclear localization signals (NLS) are reported for the CPsV, MiLBVV and RWMV polymerases and for the RNA-2-encoded proteins of CPsV and MiLBVV.For CPsV the 5′ ends of the complementary strand of RNA-1, RNA-2 and RNA-3 are identical, GATAC(T)7, but the 3′ ends are all different. For MiLBVV, the respective 5′ and 3′ ends are conserved among the four viral RNA segments.

The CP is the only significant antigenic element. In Western blots, CPs of RWMV, TMMMV, MiLBVV and LRNV appear to be slightly to moderately serologically related. CPsV CP is serologically unrelated to the others.

Ophioviruses can be mechanically transmitted to a limited range of test plants, inducing local lesions and systemic mottle. The natural hosts of CPsV, RWMV, MiLBVV and LRNV are dicotyledonous plants of widely differing taxonomy. In contrast, monocots are naturally infected by TMMMV [tulip (Tulipa gesneriana L., Liliaceae)] and FreSV [freesia (Freesia refracta hybrids, Iridaceae) and Lachenalia (Lachenalia hybrids, Hyacinthaceae)]. CPsV is commonly transmitted by vegetative propagation of the host and no natural vectors have been identified, although natural dispersion of psorosis disease has been observed in a few locations. No vector is known for RWMV. The zoospores of Olpidium brassicae transmit TMMMV, MiLBVV and LRNV; FreSV is soil-transmitted, presumably by the same vector.

CPsV has a wide geographical distribution in citrus in the Americas, in the Mediterranean and in New Zealand. RWMV has been reported in two species of the family Ranunculacae from Northern Italy, and in lettuce in France and Germany. TMMMV has been reported in tulips in Japan. MiLBVV is the causal agent of big-vein symptoms (zones cleared of chlorophyll, parallel to the veins) in lettuce; this widespread and damaging disease probably occurs world-wide. LRNV is closely associated with lettuce ring necrosis disease in The Netherlands, Belgium and France. FreSV has been reported in Europe, Africa, North America and New Zealand.

The different criteria considered for species demarcation in the genus are:

Alignments between CPsV, FreSV, MiLBVV, LRNV and RWMV (partial cds) CP amino acid sequences show 31–52% identity (53–70% similarity) for isolates belonging to different species, while showing about 92–100% identity for isolates of the same species. Since CPs of MiLBVV and TMMMV (partial cds) share about 80% amino acid sequence identity, this may warrant the establishment of the following molecular criterion for ophiovirus species demarcation:

Ophiovirus-specific primers, based on a highly conserved sequence of RNA-1, have been tested in RT-PCR with all ophiovirus species. In all cases, a 136 bp fragment was amplified. Phylogenetic analysis of the deduced 45 aa strings derived from the amplified sequences of available isolates for each species (Figure 3) supported the positions of CPsV, RWMV, LRNV and FreSV as distinct species and indicated a closer relationship between MiLBVV and TMMMV, as already suggested by serological tests and preliminary sequence data. CPsV appears to be more distantly related to the other members, not only from serological and molecular data but also because it infects a woody host and there is no evidence of soil-borne transmission. These differences, if reinforced, may also lead to the re-assignment of the existing species into two separate genera in the family.

Similarity with other taxa (Figure 4)

Ophiovirus virion morphology resembles that of the tenuiviruses and the internal nucleocapsid component of members of the family Bunyaviridae. Unlike tenuiviruses, ophioviruses do not infect plants in the Gramineae, and unlike members of the family Bunyaviridae they do not have enveloped virions. Moreover, ophioviruses do not have the conserved identical nucleotides at the genomic RNA termini that are typical of tenui- and phleboviruses (family Bunyaviridae). MiLBVV appears to have a terminal “corkscrew”-like conformation similar to that in Orthomyxoviridae. RdRp aa sequences show ophioviruses to be similar to members of the families Paramyxoviridae, Rhabdoviridae, Bornaviridae and Filoviridae, and the (unassigned) genus Varicosavirus (Figure 4). The RdRp also contains the SDD sequence in motif C, a signature for segmented negative stranded RNA viruses (families Orthomyxoviridae, Arenaviridae and Bunyaviridae). However, phylogenetic reconstructions using the sequences of the conserved RdRp motifs of representative negative stranded RNA viruses reinforce the taxonomic relatedness of the ophioviruses and suggest their separation as a monophyletic group.

Ophio: from the Greek ophis, “serpent”, referring to the snaky appearance of the virions. 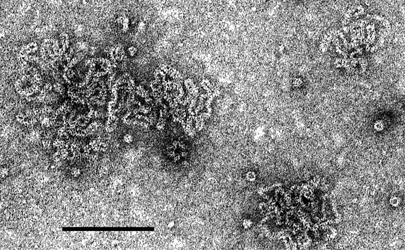 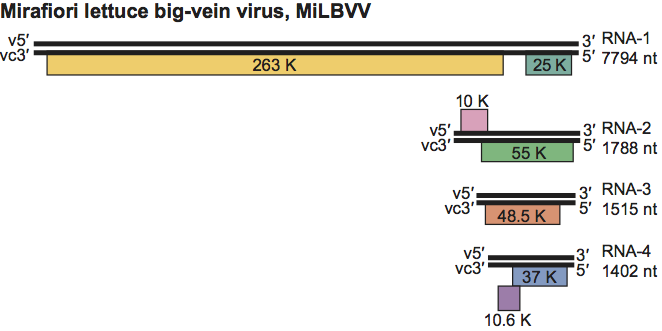 Figure 3 Unrooted phylogenetic tree based on the predicted amino acid sequences (45aa) encoded by the conserved 136 nt fragment of the RdRp gene, obtained from 20 ophiovirus isolates belonging to the six species. Alignment was obtained using ClustalW, and analyzed by the neighbor-joining method, with 10 000 bootstrap replications. The percentage of replicate trees in which the associated taxa clustered together in the bootstrap test are shown next to the branches (when >50%). The evolutionary distances were computed using the Poisson correction method. 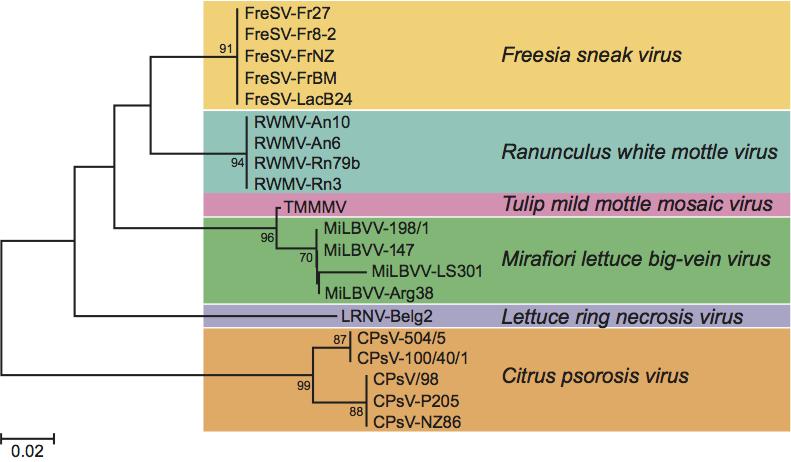 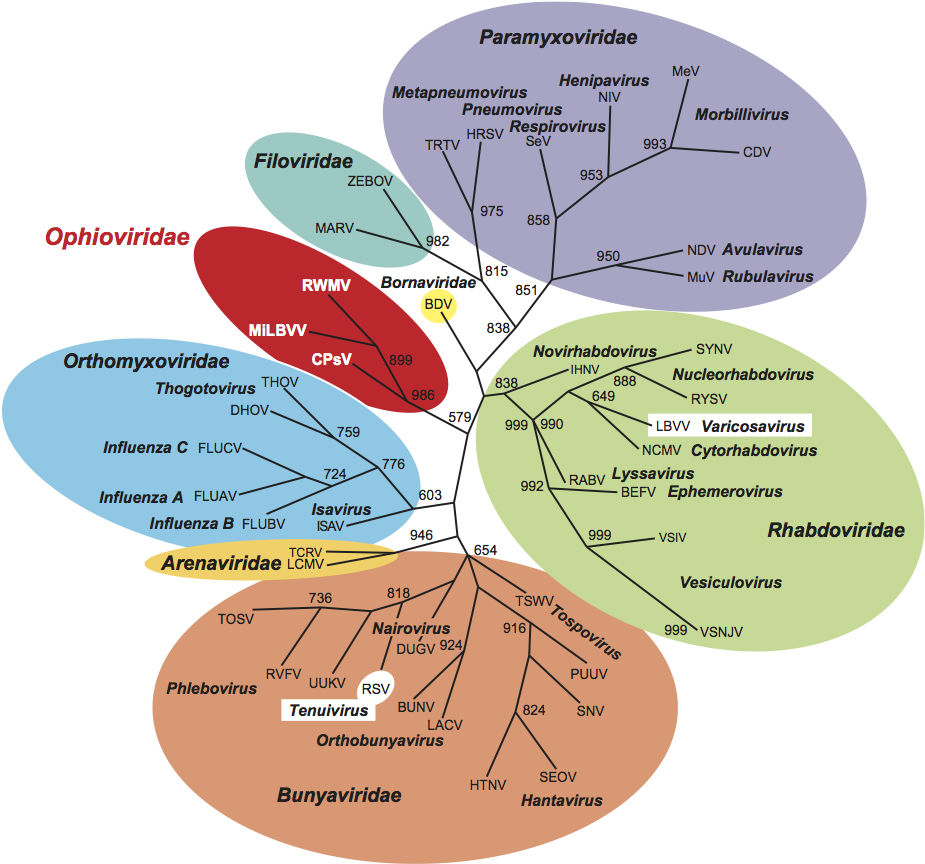