The virions are large enveloped structures with a prominent fringe of peplomers, 5–10 nm long and spaced 7–10 nm apart, in all except the members of the family Bornaviridae. The morphologies are variable and individual particles frequently exhibit pleomorphism, but in general distinguish the families: 90 nm diameter spherical particles with a 50 nm diameter electron-dense core and without peplomers in the family Bornaviridae; simple, branched, U-shaped, 6-shaped or circular filaments of uniform diameter (about 80 nm) extending up to 14,000 nm are characteristic of viruses classified in the family Filoviridae, although purified virions are bacilliform and of uniform length (e.g. 790 nm in the case of Marburg virus); filamentous, pleomorphic or spherical structures of variable diameter are characteristic of viruses belonging to the family Paramyxoviridae; and regular bullet-shaped or bacilliform particles are characteristic of the member viruses of the family Rhabdoviridae. The ribonucleoprotein core has a diameter of 13–20 nm, which in viruses belonging to the families Filoviridae and Rhabdoviridae is organized into a helical nucleocapsid of about 50 nm in diameter. Differences in helical pitch of the ribonucleoprotein core distinguish the Paramyxovirinae from the Pneumovirinae.

Virions contain one molecule of linear, non-infectious, negative sense, ssRNA, 8.9–19 kb in size, Mr of 3–5×106 which comprises about 0.5 to 2.0% of the particle weight. The viral RNA lacks a capped 5’ terminus, or a covalently associated protein. The 3’ terminus of viral RNA lacks a poly(A) tract. The 5’- and 3’-terminal regions exhibit significant inverse complementarity, and there are conserved motives in the terminal regions of all four families. Full-length positive sense (anti-genomic) RNAs are found in infected cells. The genome comprises a linear sequence of genes, with limited overlaps in some viruses, and with short terminal non-coding regions. The virus genes are expressed as individual transcription units, each bounded by short transcription start and termination sequences. The transcription start and termination sequences show considerable similarities within the families with conserved motifs present in all families. The non-transcribed intergenic regions range from two to several hundred nucleotides. The predominant pattern is that each individual virus mRNA encodes a single protein but exceptions are seen; genetic information may be encoded in all three reading frames in the P genes of respiroviruses and morbilliviruses and the M2 genes of the Pneumovirinae encode two proteins from different reading frames. Splicing of some mRNA and overlapping start/stop signals are characteristic of bornaviruses. In the subfamily Paramyxovirinae of the family Paramyxoviridae, but not the subfamily Pneumovirinae, the number of nucleotides in the genome is divisible by six (“the rule of six”), presumably reflecting a nucleocapsid structural constraint.

There are a limited number of proteins in relation to the large particle size. The 5–7 structural proteins comprise envelope glycoprotein(s), a matrix protein, a major RNA-binding protein, other nucleocapsid-associated protein(s), plus a large molecular weight polymerase protein, and in some viruses several non-structural proteins which may be phosphorylated. The matrix protein is non-glycosylated in all except the bornaviruses. The matrix protein of Borna disease virus is N-glycosylated and expressed on the surface of virions. Enzymatic activities associated with the virions may include transcriptase, polyadenylate transferase, mRNA transferase and neuraminidase.

Virions are composed of about 15–25% lipids, their composition reflecting that of the host cell membrane from which the virions bud. Generally, phospholipids represent about 55–60%, and sterols and glycolipids about 35–40% of the total lipids. Glycoproteins may have a covalently associated fatty acid proximal to the lipid envelope.

Virions are composed of about 3% carbohydrate by weight. The carbohydrates are present as N- and O-linked glycan chains on surface proteins and on glycolipids. When made in mammalian cells the oligosaccharide chains are generally of the complex type, in insect cells they are of the non-complex types.

In the families Filoviridae, Paramyxoviridae and Rhabdoviridae, the site of multiplication is the cytoplasm, with the exception of viruses classified in the genus Nucleorhabdovirus. The 3’ end (leader) region of the genomes contains the promoter element which directs the virus RdRp to initiate transcription. Discrete mRNAs are transcribed by sequential interrupted synthesis. Transcription is polar, with a gradient of attenuation. The order of the genes on the genome encoding the structural proteins is conserved, though individual members may carry additional genes located between the structural genes (Table 1). The presence of these additional genes may affect the relative levels of the mRNAs from the structural genes. The mRNAs are capped and polyadenylated, with polyadenylation occurring as a result of iterative transcription from a short poly U tract at the end of each gene. Generally, genes do not overlap, the exceptions being the M2 and L genes of pneumoviruses, the VP30 and VP24 of the Marburgviruses and the VP35/VP40, GP/VP30 and VP24/L of ebolaviruses. The P genes of Paramyxovirinae encode multiple proteins. In members of the respirovirus, morbillivirus and Henipavirus genera, the C proteins arise from the use of an alternative reading frame accessed by a standard AUG initiation codon, and additional C-related proteins in the respiroviruses by the use of non-AUG start codons. Members of the avulavirus and rubulavirus genera do not encode a C protein. In all members of the subfamily Paramyxovirinae, except human parainfluenzavirus type 1, a proportion of the P mRNA produced by the virus is altered by an editing process in which one or more additional guanine residues, not represented by cytosine residues in the template genome, are inserted at a specific site in the mRNA during transcription. This process results in translation of the edited mRNA utilizing a different reading frame following the position of the inserted base(s) to direct the synthesis of the additional V and W proteins. In the avulaviruses the faithfully transcribed mRNA encodes the V protein and the P protein is produced from an edited mRNA. A non-templated insertion event occurs during transcription of the glycoprotein gene of ebolaviruses generating both membranes-inserted and secreted forms of the glycoprotein. The M2 mRNA of the members of the Pneumovirinae sub-family encode a second protein from an additional ORF accessed by a coupled translation process dependent on translation of the upstream ORF. Replication occurs by synthesis of a complete positive sense anti-genomic RNA. Genomic and anti-genomic RNAs are present as nucleocapsids. In the family Bornaviridae, the site of multiplication is the nucleus. Transcription of bornavirus genomes is complex, with splicing of mRNA and overlapping stop/start signals. The mRNAs of bornaviruses are capped, but synthesis is not inhibited by alpha-amanitin, suggesting that a cap-snatching mechanism is not involved. In the filoviruses, paramyxoviruses and rhabdoviruses, maturation of the independently assembled helical nucleocapsid occurs by budding through host membranes with investment by a host-derived lipid envelope containing transmembrane proteins. The process of assembly and maturation of bornaviruses is not known at present.

Table 1 A diagrammatic representation of the 3’ to 5’ arrangement of the transcriptional units in the genomes of viruses classified in the four families (Bornaviridae, Filoviridae, Paramyxoviridae and Rhabdoviridae) comprising the order Mononegavirales

The major neutralizing epitopes against which antibodies are directed lie within the membrane glycoproteins. Virus serotypes are defined by the surface antigens. Filoviruses are an exception in that they are poorly neutralized in vitro. In bornaviruses, antibodies to both the glycosylated matrix protein, which may function as an attachment protein, and the gp94 envelope protein neutralize infectivity.

The host ranges vary from restricted to unrestricted. Filoviruses have only been isolated from primates and swine. Paramyxoviruses occur only in vertebrates and no vectors are known. Rhabdoviruses infect invertebrates, vertebrates and plants. Some rhabdoviruses multiply in both invertebrates and vertebrates, some in invertebrates and plants, but none in all three. In human hosts the pathogenic potential tends to be characteristic of the family: i.e. hemorrhagic fever (Filoviridae); respiratory and neurological diseases (Paramyxoviridae); mild febrile to fatal neurological diseases (Rhabdoviridae). Bornaviruses have been isolated from horses, cattle, sheep, rabbits, rats, cats, ostriches and man. The pathology associated with virus infection is variable. Infection of animals is associated with conditions ranging from behavioral disturbances to severe non-purulent encephalomyelitis. Cytopathology varies from none (bornaviruses and filoviruses) to rapidly lytic (rhabdoviruses and paramyxoviruses); syncytium formation is common in paramyxoviruses.

Phylogenetic relationships within the order

Phylogenetic relationships between the families Bornaviridae, Filoviridae, Paramyxoviridae and Rhabdoviridae are illustrated in Figure 1. 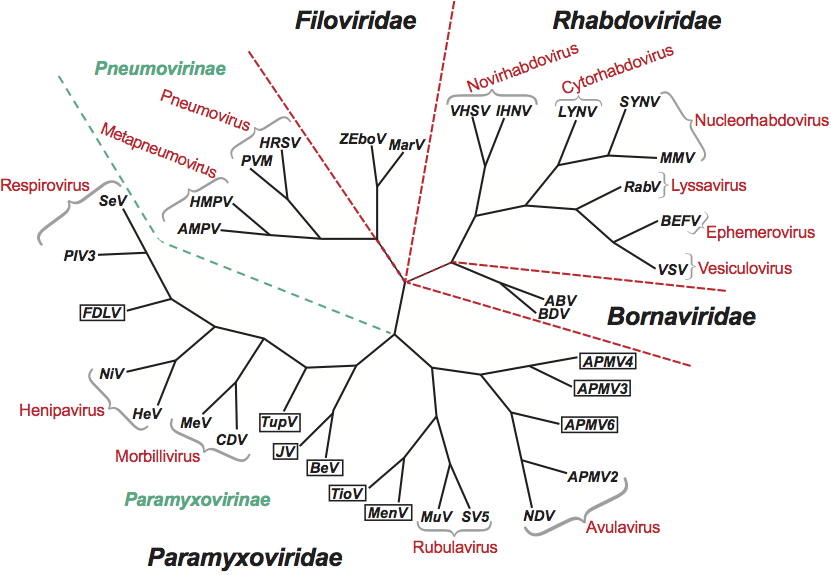 Borna: from Borna, a town in Saxony.

Ebola: from the river Ebola, in Sudan and Zaire.

Marburg: from the city of Marburg, in Germany.

Meta: from Greek meta, “after”.

Respiro: from Latin respirare, “to breathe”.