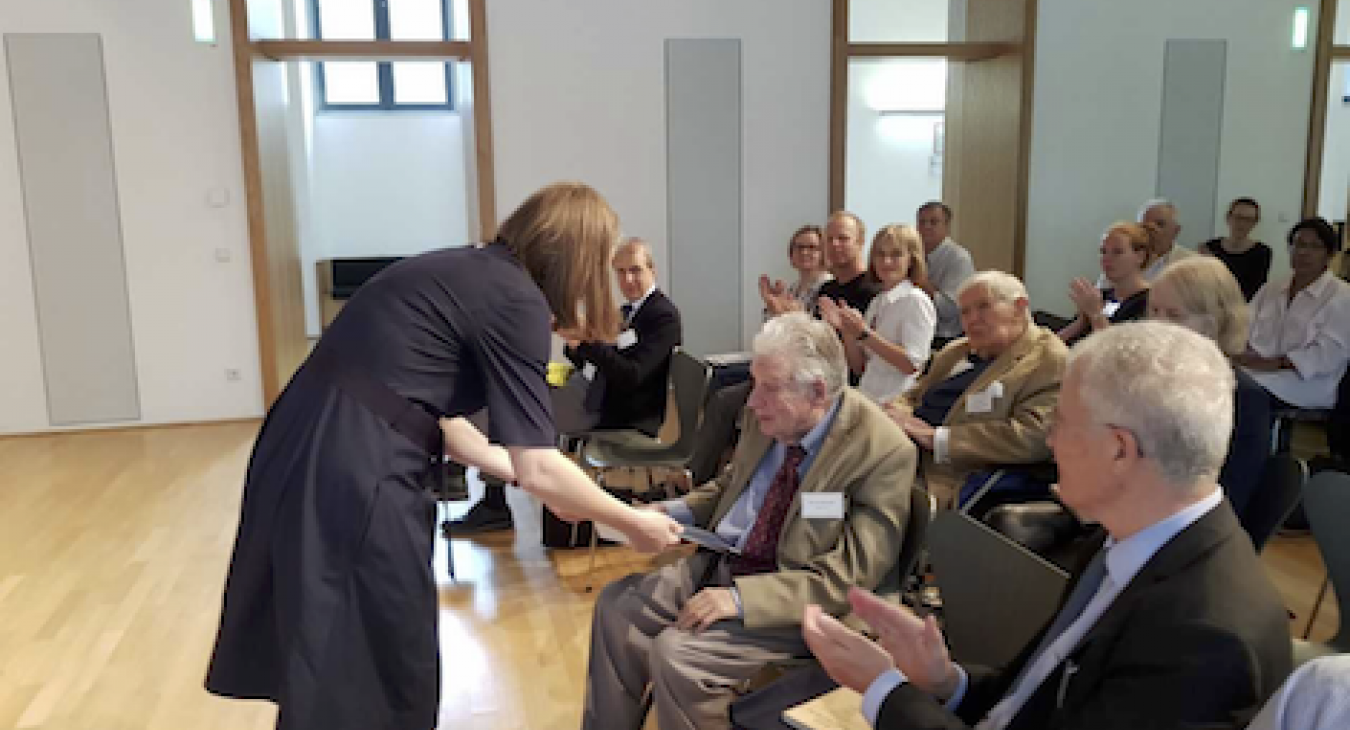 The symposium was organised by Springer Nature on the event of Tim Skern taking over the editorship of Archives of Virology from Marc van Regenmortel, who has held this appointment for over 20 years.

The meeting took place in the van Swieten Saal, the ceremonial room of the Medical University of Vienna. As explained by Tim Skern, the symposium chair, the meeting room and the street outside were named after Gerard van Schwieten, Dutch physician to Maria Theresa, Empress of Austria of the Habsburg imperial family in the 18thCentury, also a religious reformer, proposer of sanitary reform and best known for his dispelling the superstition of fear of vampires, at the time widely believed to exist in the Habsburg empire.

Eric Westhof, well known RNA structure expert based in IBMC/CNRS, Strasbourg and a long-time colleague of Marc van Regenmortel, presented the Laudatio, in which he described Marc’s career, his keen interest in protein structure and his broader interest in systems biology, complexity in biology and his long term involvement in the ICTV and his important role in shaping many of the principles of virus taxonomy.

Marc’s own presentation, an engaging combination of practical and philosophical snapshots of his extraordinarily broad career and contributions to virology and wider biology, included many specific references to virus taxonomy and some attention to the species term used for virus classification and its frequent confusion with names of viruses – strong support indeed for consistently distinct and perhaps Latinised species binomial names that he himself advocated nearly 20 years ago.

In the afternoon session on the theme of “The sequence explosion challenge”, speakers presented quite contrasting and complementary accounts of the practical and broader aspects of virus diversity and classification. Peter Simmonds described some of the specific problems with classifying metagenomic data and potential bioinformatic approaches that might enable it to be incorporated into the ICTV taxonomy. Jens Kuhn took a much broader approach, describing the principles of biological classification and the contrasting properties of species and the objects they seek to categorise. Finally, Charles Calisher described the principles of the polythetic species definition and its application to virus taxonomy. Along with Marc’s concluding comments, there is much to think about in future approaches to virus classification, both at the practical and the philosophical level, none more so that at the species level. The discussions might serve as a starting point for some further investment in this area by the ICTV.